The Havergal Trust has recently started sending emails of pieces by Frances every two weeks. SUBSCRIBE 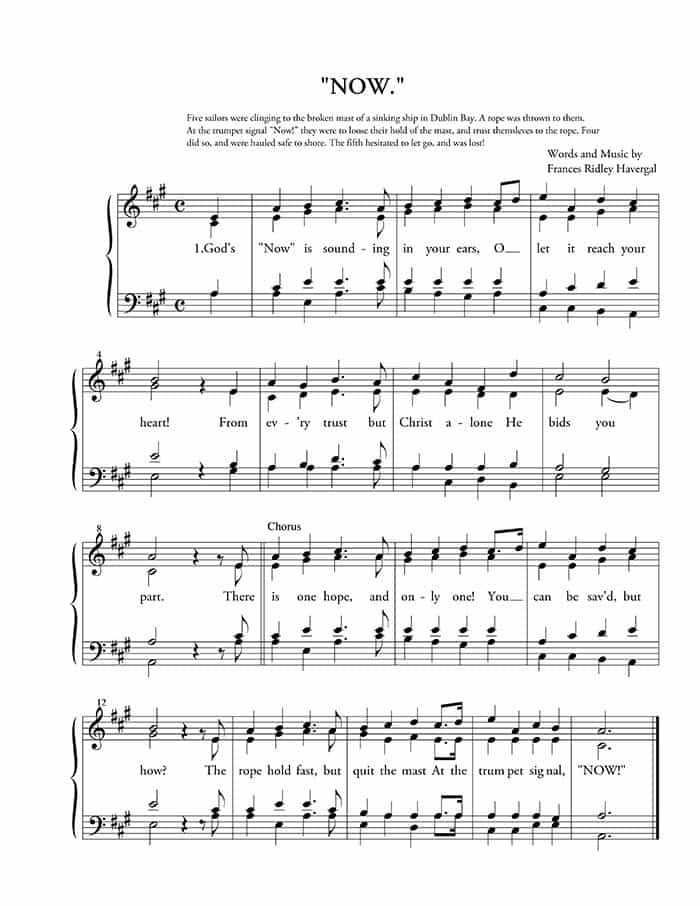 Five sailors were clinging to the broken mast of a sinking ship in Dublin Bay. A
rope was thrown to them. At the trumpet signal “Now !” they were to loose their
hold of the mast, and trust themselves to the rope. Four did so, and were hauled
safe to shore. The fifth hesitated to let go, and was lost !

1. God’s “Now” is sounding in your ears,
O let it reach your heart !
From ev’ry trust but Christ alone
He bids you part.

Chorus. There is one hope, and only one !
You can be sav’d, but how?
The rope hold fast,
But quit the mast
At the trumpet signal, “NOW !”

2. Your righteousness as filthy rags
Must all relinquished be,
And only Jesu’s precious death
Must be your plea.

3. Trust now the one provided rope,
Quit now the broken mast !
Before the hope of safety be
For ever past.

4. Fear not to trust His simple word,
So sweet, so tried, so true !
And you are safe for evermore,
Yes, even you !

Late in her life F.R.H. began to set to music the 31 poems of Loyal Responses,
not yet having set all of them when she died (other scores by F.R.H. were
posthumously fitted to the poems not newly set to music by her before her
death).  Her sister Maria published posthumously in 1881 Loyal Responses  The
Last Melodies of Frances Ridley Havergal with Other Poems and Tunes.  At the
end, after the 31 poems, another 9 scores composed by Frances were published
in this book, among “The Last Melodies” she wrote. “Now” was the third of those
9 additional scores, the text adapted from her longer poem entitled “Now” (written
in September, 1869, published in her volume Under the Surface in 1874), which
is given next. 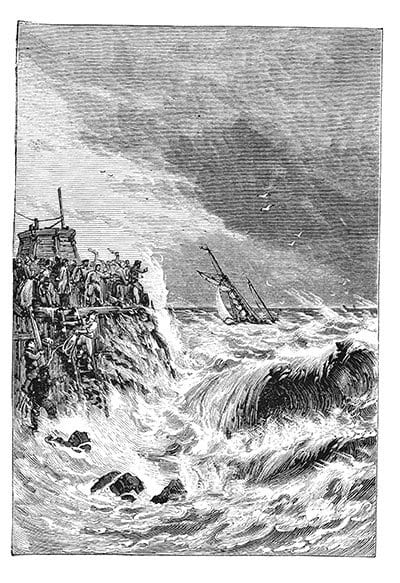 This was the frontispiece of Never Say Die, by Samuel Gillespie Prout, published
in F.R.H.’s last year, in late 1878 or 1879, with her costly involvement and heartful
support.

A night of danger on the sea,
Of sleeplessness and fear !
Wave after wave comes thundering
Against the strong stone pier;
Each with a terrible recoil,
And a grim and gathering might,
As blast on blast comes howling past,
Each wild gust wilder than the last,
All through that awful night.

Well for the ships in the harbour now,
Which came with the morning tide;
With unstrained cable and anchor sure,
How quietly they ride !
Well for the barque that reached at eve,
Though watched with breathless fear,
It was sheltered first ere the tempest burst,
It is safe inside the pier !

But see ! a faint and fatal light
Out on the howling sea !
’Tis a vessel that seeks the harbour mouth,
As in death-agony.
Though the strong stone arms are open wide,
She has missed the only way;
’Tis all too late, for the storm drives fast,
The mighty waves have swept her past,
And against that sheltering pier shall cast
Their wrecked and shattered prey.

Nearer and nearer the barque is borne,
As over the deck they dash,
Where sailors five are clinging fast
To the sailless stump of the broken mast,
Waiting the final crash.
Is it all too late ? is there succour yet
Those perishing men to reach ?
Life is so near on the firm-built pier,
That else must be death to each.

There are daring hearts and powerful arms,
And swift and steady feet,
And they rush as down to a yawning grave,
In the strong recoil of the mightiest wave,
Treading that awful path to save,
As they trod a homeward street.
Over the boulders and foam they rush
Into the ghastly hollow;
They fling the rope to the heaving wreck,
The aim was sure, and it strikes the deck,
As the shouts of quick hope follow.

Reached, but not saved ! there is more to do,
A trumpet note is heard;
And over the rage and over the roar
Of billowy thunders on the shore,
Rings out the guiding word.
There is one chance, and only one,
All can be saved, but how?
“The rope hold fast, but quit the mast
At the trumpet-signal “ N O W ! ”

There is a moment when the sea
Has spent its furious strength;
A shuddering pause with a sudden swirl,
Gathering force again to hurl
Billow on billow in whirl on whirl;
That moment comes at length—
With a single shout the “Now” peals out,
And the answering leap is made.
Well for the simple hearts that just
Loosing the mast with fearless trust,
The strange command obeyed !

For the rope is good, and the stout arms pull
Ere the brief storm-lull is o’er;
It is but a swift and blinding sweep
Through the waters wild and dark and deep,
And the men are safe on shore—
Safe ! though the fiend-like blast pursue,
Safe ! though the waves dash high;
But the ringing cheer that rises clear
Is pierced with a sudden cry:

“There are but four drawn up to shore,
And five were on the deck ! “
And the straining gaze that conquers gloom
Still traces, drifting on to doom,
One man upon the wreck.
Again they chase in sternest race
The far-recoiling wave;
The rope is thrown to the tossing mark,
But reaches not in the windy dark
The one they strive to save.

Again they rush, and again they fail,
Again, and yet again:
The storm yells back defiance loud,
The breakers rear a rampart proud,
And roar, “In vain, in vain ! “

Then a giant wave caught up the wreck,
And bore it on its crest;
One moment it hung quivering there
In horrible arrest.
And the lonely man on the savage sea
A lightning flash uplit,
Still clinging fast to the broken mast
That he had not dared to quit.

Then horror of great darkness fell,
While eyes flashed inward fire;
And over all the roar and dash,
Through that great blackness came a crash,
A token sure and dire.
The wave had burst upon the pier,
The wreck was scattered wide;
Another “Now” would never reach
The corpse that lay upon the beach
With the receding tide.

God’s “Now” is sounding in your ears;
Oh, let it reach your heart !
Not only from your sinfulness
He bids you part;
Your righteousness as filthy rags
Must all relinquished be,
And only Jesus’ precious death
Must be your plea.

Now trust the one provided rope,
Now quit the broken mast,
Before the hope of safety be
For ever past.
Fear not to trust His simple word,
So sweet, so tried, so true,
And you are safe for evermore;
Yes,—even you!

The harp was F.R.H.’s personal emblem. This harp copied here was published on the front cover of her first book, The Ministry of Song (published in 1869 by the Christian Book Society, London). She was a musician to the core.